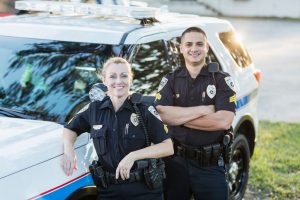 Sworn law enforcement officers are protecting us at every level – from the nation’s top federal agencies to the smallest county sheriff’s offices and municipal police departments. They’re patrol officers, detectives, supervisors, and deputies comprised of college grads, former military personnel, and young adults fresh out of high school. It’s a diverse and dedicated group, hailing from backgrounds in the courts, security services, the correctional system, social services, and more.

They bring with them an unwavering moral compass and steadfast commitment to protecting people and property by enforcing local, tribal, state, and federal laws and ordinances.

They are the epitome of dedication, professionalism, integrity, and excellence, even when the job proves demanding and thankless and when early mornings turn to late nights and exhausting circumstances try to get the best of them

Choose a career in this field and you’ll be in good company as part of a big team dedicated to the greater good, with the number of sworn officers active in the U.S. topping 795,000 as of 2020, with another 128,000-plus first-line supervisors in the ranks to back them up.

In law enforcement, it’s all about paying your dues through hard work and experience, so don’t expect a supervisor’s paycheck from the get-go. But it’s a career where hard work pays off and rising through the ranks will get you the recognition and the salary you deserve.

Learn more about where a career in law enforcement can take you and how much you’ll earn when you get there: 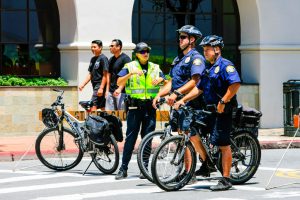 The Bureau of Labor Statistics (BLS) provides a general breakdown of salaries (at the 25th, 50th, and 90thpercentiles) for law enforcement officers in different fields as of May 2021.

Federal Law Enforcement Agencies: According to the Bureau of Justice Statistics (BJS), there are 83 federal agencies in which about 132,000 full-time federal law enforcement officers work. These units or agencies within the federal government have the “principal functions of prevention, detection, and investigation of crime and the apprehension of alleged offenders.”

The largest number of federal law enforcement officers (37,482) work for Customs and Border Protection, followed by Immigration and Customs Enforcement (11,779).

According to the BLS, federal law enforcement officers earned an average salary of $63,450, as of May 2021, while first-line supervisors at the federal level earned an annual, mean salary of $138,630.

State Police Agencies – There are 49 primary state law enforcement agencies in the U.S. (Hawaii does not have a state agency; instead, it is served by four police forces.) and about 60,000 law enforcement officers working at this level. State police agencies, which generally operate under the state’s department of public safety, employ state troopers who enforce traffic laws, conduct statewide investigations, and support local police departments.

County Sheriff’s Offices – Sheriff’s offices provide law enforcement services to the unincorporated areas of counties and operate under the direction of a sheriff, an elected official. Some of the county-wide responsibilities of sheriff’s deputies within these departments include jail operation, prisoner transportation, traffic control, crime investigation, patrol, and more.

Local Police Departments – There are more than 12,000 police departments in the U.S., operating as local units of government for towns, cities, townships, or municipalities. Salary ranges at this level vary widely due to metropolitan police force sizes and budgets.

Transit and Railroad Police – Transit and railroad police officers are responsible for maintaining order and ensuring public safety on transit systems. They also investigate crimes committed on rail lines, subways, bus lines, and more. There were about 3,590 transit and railroad law enforcement officers working for local and state agencies and private companies as of May 2021, according to the BLS. 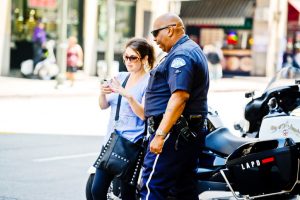 College Degrees – You may be able to score a job in state or local law enforcement with just a high school diploma or GED, but don’t expect to land yourself among the most qualified applicants. Not only will a post-secondary education get you noticed in the hiring process, but it will also give you a leg up when it comes time to take the department’s written exam and oral interviews. Plus, if you land the job, you’ll also likely make more than your colleagues with no college degree.

Many aspiring law enforcement officers come to the table with an associate’s degree, although it’s more common these days to find applicants with a bachelor’s or even master’s degree in an area like criminal justice, criminology, public safety, psychology, or a similar field.

Military Service – While only about one percent of the U.S. population serves in the military, this pool of veterans is extremely attractive to most law enforcement organizations. Not only have veterans already successfully completed rigorous physical and firearms training, but they’re also better equipped to handle high-stress, high-risk situations. Many veterans have experienced combat, which makes them well-equipped to handle the risks associated with holding a law enforcement position.

Coming from a background that values loyalty, commitment, trustworthiness, and allegiance, veterans are a natural fit for law enforcement at any level, which is why you’ll find that nearly all law enforcement agencies provide some type of hiring preference to military veterans. Many more provide hiring and salary incentives for veterans, too.

Superior Performance – While not every recruit enters the force with the academic or professional skills that law enforcement agencies prize, all have the capacity to work hard, demonstrate enthusiasm, and acquire new skills. Among the most highly valued skills in any law enforcement agency is professional excellence. Officers who take up challenging assignments and perform at their highest standards are often marked for early promotion or advancement to specialized positions and the higher paychecks that come along with them.

You can position yourself for promotion and advancement by pursuing training opportunities, seeking out a mentor on the force who can provide you with invaluable career advice, completing all duty requirements to the best of your ability, and volunteering for assignments that allow you to demonstrate greater responsibility and/or expertise.

2021 US Bureau of Labor Statistics salary figures for police and detectives, police and sheriff’s patrol officers, transit and railroad police, correctional officers and jailers, and first-line supervisors of police and detectives. Job growth projections from the US Department of Labor-sponsored resource, Projections Central. Figures are based on national data, not school-specific information. Conditions in your area may vary. Data accessed August 2022.